Matt Prior: EV 3-wheeler is the next step for Morgan

Funny how attitudes change so quickly.

Three times last week while out with the Morgan Super 3, I was asked if it was electric. It isn’t, although Morgan has had an electrified three-wheeler before, in 2016, and the new Super 3 has been designed with future electrification in mind.

Beyond that description, Morgan doesn’t want to talk about it at the moment, but you can see how it’d fit, literally and ethically, with the Super 3.

Practically, they could put a modest electric motor where the bevel box for the final drive is, which currently sits and transfers the prop shaft’s rotation from the gearbox through 90deg into a shaft for a pinion to which the drive belt is attached.

Then there’s the lump of engine and gearbox in front and between driver and passenger, plus a fuel tank beneath the occupants and even some space down the edge channels beneath the boot floor, for locating batteries, the inverter and so on.

In ethos, a Super 3 EV would fit, too. European regulations label companies like Morgan and the cars and trikes it makes at ‘micro-manufacturer’ level, which means the products are ‘out of scope’ of some wider regulations around emissions, and the demand for absence of. At least, until legislators rewrite them.

But an EV isn’t a new idea for Morgan, and with the Super 3 and its sci-fi, retro-futuristic Moore-era-Bond-villain-lair-wagon vibe, you could imagine one fitting into the range quite nicely.

It’s not like it needs hundreds of horsepower: the current car shifts nicely with just 118 horses. Or, depending on the owner, like it needs a range of many hundreds of miles. Or to be super-lightweight for ultimate track performance.

If you’re au fait with the whole thing, then, it all makes sense. But what I didn’t expect was for people who hadn’t seen this three-wheeler before or know much about what it was, for one of their first questions to be about whether it was a BEV.

Is it as simple as them having seen a 3 Wheeler before, remembering deep down that it used to have a big engine stuck out of the front, and wondering where it’s gone? Does it look futuristically electrified? Or has public opinion shifted so quickly that it seems logical that an unidentified new car should be an EV?

On the theme, it seems public acceptance of BEVs gave Toyota the hurry-up. 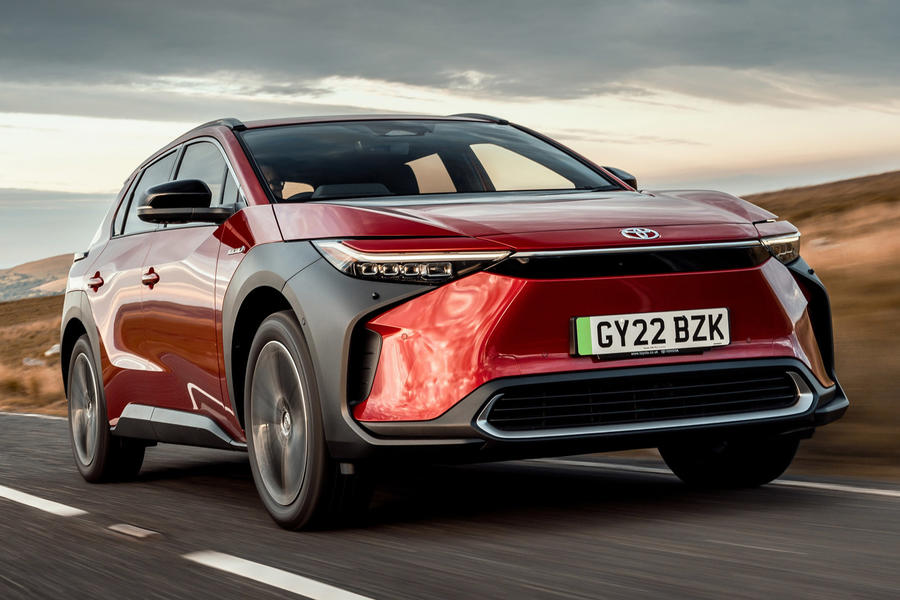 For a company big on electrification – it has been making hybrids for a quarter of a century and likes fuel cell vehicles – it was quite slow to bring out a range of battery-electric cars, stating that we should note it had the lowest average CO2 rating of any non-pure EV manufacturer already.

Then it took the wraps off 15 production and concept BEVs at the start of the year.

It has been working on the Toyota bZ4X for four years but such is the demand to get it on sale that it arrives first with a 6.6kW onboard charger, which will be replaced later this year with an 11kW version. The reason? The latter wasn’t ready but bosses wanted it on sale.

It won’t make much difference to UK buyers, who typically have a single-phase 7kW supply rather than a three-phase 11kW one, but still, that is a curious and rapid turnover, for the sake of a few months in the market.